If you’re going to translate a site into another language, make sure the translation is thorough. This is related to one of the first entries here, ‘Provide accurate translations’, but it relates to a specific problem that results in half-translated text, as opposed to translations where all the text is changed to a new language, but the words are simply wrong or the sentence structure is weird.

What not to do

If you try to use the FedEx US website in Spanish, half the text is still in English. That wouldn’t be as much of a comprehension problem for somebody who’s fully bilingual in both languages, but it’s still jarring to see text in two languages: 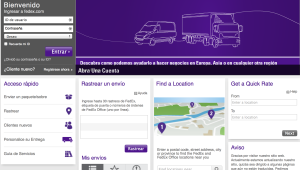 Tumblr’s French translation has a lot of untranslated English text interspersed, including some huge date and time format failures.

There are three mistakes here:

I’m not sure how many people actually use the French translation of Tumblr, but even so, if you’re going to translate your website, make sure your text is translated. The ‘archive’ page on Tumblr has a similar problem, with completely untranslated month names – it should be ‘janvier’, not ‘January’, and the date format is again wrong for French. (I’m starting to lean towards recommending against using the US date format at all if you plan on translating a website, instead using the unambiguous ISO date standard, since it seems to be a revealing error in translations.)

Their newest UI change, where recent activity is shown by clicking on a thunderbolt icon in the top bar, has a similar problem with mostly untranslated text. Dates are shown in English (using the Month Day, Year format), as are phrases like ‘one week ago’. Again, the date format is wrong for French.

Mozilla’s Firefox add-ons page seems to have the same problem as Tumblr:

Most of the text is in German, except for the date, which says ‘Benutzer seit [translation: User since]: July 9, 2010′. The date should be translated into ‘9. Juli 2010’. The bottom bar, where the copyright section is located, has more untranslated text:

‘Report Trademark Abuse’ and the copyright notice have not been translated into German. Not to mention, the assumed word length for some of those words is too short for German.

This is frustrating, because Firefox gets top marks for the sheer amount of localisations available for it; it’s too bad that Mozilla’s centralised websites aren’t up to scratch.

Something similar occurs on Behance, Adobe’s online portfolio website. If you set your language to French, there’s still a lot of English text throughout.

If your translation to another language or language variant is incomplete, then add a warning letting the user know that they may come across text that’s in a different language. That seems more thoughtful than trying to use a website or application in Chinese, only to have lots of text interspersed throughout in another language. When you change to a language that isn’t available in OS X, the operating system will warn you that menus and applications won’t be available in that language. Etsy did something similar with their Russian translation – if you chose Russian, it told users that it was a beta and that some English text would still be there.

2 thoughts on “If you’re going to translate, translate thoroughly”