Despite what some developers seem to think, the entire world does not constitute the USA. This section is specifically targeted towards American software companies and online businesses (though the nature of other sections can apply to them as well, and I’ve seen some non-American companies that make the same mistakes) who market their services outside the US, but the lack of attention given to internationalisation makes their products less useful for non-American users.

What not to do: 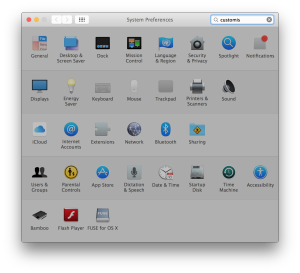 In OS X Yosemite, I can’t search for the option to ‘customise’, but I can search for ‘customize’. The common spelling in the UK, Australia, New Zealand and Ireland (and amongst many speakers in India, Nigeria and other countries where a variant of Commonwealth English is an administrative language) is ‘customise’. OS X should allow for both spellings. At least OS X is better than Prezi, though, who can’t even be bothered to include spellcheckers for English dialects other than American.

(Update, 20 October 2018: This particular Apple problem has been eliminated with the release of MacOS Mojave.)

1 thought on “We’re not all living in America”